Scott Pilgrim Vs The World by Various 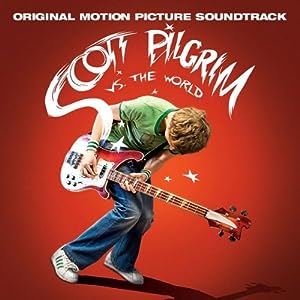 And lo it was November, the month of giving thanks, and verily the masses did so for Subjective, inc had arisen from the grave to once again tell them exactly why all the music they like sucks.

Seriously though guys, I hope we're back again for another spell of music reviews, and to kick it off I'll start with this mistake of an album. Just to be clear, I'm not saying I think this is a bad album, just that I am royally pissed that I got it, because I totally thought I was getting The Scott Pilgrim video game chiptune soundtrack by the consistently awesome Anamanaguchi and instead I got this..this...real music!

In a chronic case of diminishing returns I loved the Scott Pilgrim comics, I liked the Scott Pilgrim movie and I'm okay with the soundtrack, I guess.  It's not bad, a pretty eclectic mix. I kind of like the Beck covers of the Sex Bo-Bomb songs (or maybe they were Beck originals, as a dedicated musical journalist I can't be bothered to look up which it is). I got a kick out of Teenage Dream by T-Rex. Those were probably the highlights of the album. Other than that, to quote my entire useless generation, meh.

Well SHiiiiiiit! I wasn't expecting this to start up at this time.

Matt is dead on about one thing. This is definitely not chiptune. Also I guess about it being pretty meh.

We Hate You Please Die and some of the songs that are "By" Sex Bob-bomb from the movie aren't that bad though. I mean anytime something has a punk feel though somehow I'm okay with it.